Home>News>UKRANIAN ANGELS TO BE DISPLAYED IN LUDLOW
|

UKRANIAN ANGELS TO BE DISPLAYED IN LUDLOW

UKRANIAN ANGELS TO BE DISPLAYED IN LUDLOW

Ludlow and the surrounding area has welcomed many Ukrainian families and individuals fleeing their country during the war that began in spring 2022.

Ukrainian artist Svitlana Dzedzei has settled in Cleobury Mortimer and is collaborating with Ludlow Town Council and Erica Garner of Ludlow’s Refugee Support Group to bring to the UK a beautiful installation of angels to remind people of the impact the war is having on Ukraine, and particularly Ukrainian children.

The work honours the memory of Ukrainian children who have died because of the war and is to show how many innocent lives have been lost.

The display of angels began its journey in the Ukrainian city of Zhilina in July 2022 and has since travelled around the Ukraine. From Ludlow and Cleobury Mortimer it is hoped that it will move from the UK to Europe to spread its important message of peace.

Hundreds of hand crocheted blue and yellow angels will be suspended from trees in Castle Gardens, Ludlow from Saturday 21st to Monday 30th January 2023, when it will move to St Laurence’s church in Ludlow.

The official opening of the Ukrainian Angels will take place in Castle Gardens on Saturday 21st January at 11am.

Mayor of Ludlow, Councillor Glenn Ginger welcomes the exhibition in Ludlow “This display is a poignant reminder of the effects of the war on the innocent children of Ukraine and their families.  We are very pleased to be able to support Svitlana in this initiative and look forward to following the angels’ journey around Europe. Please take the time to come and visit the Angels while they are in Ludlow.”

Please contact Erica Garner on ericagarner@hotmail.co.uk or mobile 07974 001310 if you would like to know more about the work of the refugee support group, or if you or any children would like to take part in the official opening. 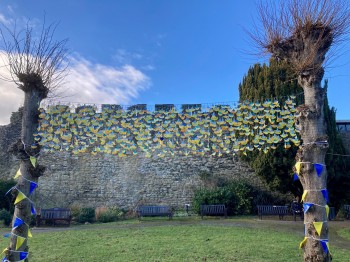